Technologia’s evidence to the House of Lords Science and Technology Select Committee on the future of Innovate UK was highly cited in its conclusions. The UK Government has announced its intention to absorb the business-facing innovation agency into an umbrella organisations containing the university-facing research councils. Technologia works extensively across the UK’s innovation ecosystem and raised its concerns about the effects of these changes in written evidence to the Committee. We stated that

The Select Committee published its conclusions in a letter to the Minister for Universities and Science. Technologia was quoted in several places and it is clear that our perspective was echoed by many Peers.

For more details please see Letter from the Earl of Selborne, Chairman of the Science and Technology Committee to Jo Johnson MP, Minister of State for Universities and Science, BIS (30 June 2016)

Technologia is part of a team analysing the impact case studies submitted by higher education institutions as part of the Research Excellence Framework. King’s College London and the technology company Digital Science have been chosen for this project while Technologia will act as an advance user in order to provide quality assurance.

Case studies are a new and speculative mechanism to enable HEIs to illustrate the impact of their research beyond academia, for example on the economy, society, culture, health and quality of life. The systematic analysis of such a large number of case studies is far from straightforward and Technologia welcomes the opportunity to contribute its long experience of case study research and of economic evaluation. Technologia used case studies to explore the role of the National Physical Laboratory and evaluate its economic impact.

Ofcom has released a new report authored by a consortium led by Technologia.

Researched and written in association with DTG and i2 Media Research, the report titled “Assessing the Impact of Second Screen”, explores top level functionality, technologies, and the commercial landscape of second screens. The research is a snapshot of the technologies and implications of those technologies on TV consumption, advertising and content regulation.

Our report is published on the Ofcom website. Report

The Centre for Carbon Measurement at the National Physical Laboratory (NPL) will deliver eight million tonnes of carbon emissions reductions and over half a billion pounds in economic benefit over the next decade, according to an independent report. This is a level of carbon saving equivalent to 2% of the UK’s annual carbon dioxide emissions. The research was carried out by Technologia, a science and technology consultancy. The aim was to understand and demonstrate the Centre’s benefit and inform its future focus. Technologia assessed 12 projects in detail and then applied these analyses to the entire portfolio of the Centre’s projects to reach the final savings figure.

The report evaluated the Centre’s portfolio of projects, which includes those to improve the accuracy of climate data from satellites, assess the potential to use biomass in end-of-life coal power stations and create a temperature based control circuit to make energy efficient lighting even more efficient. It looked at results already achieved as well as anticipated results over the lifetime of the innovations.

“The Centre for Carbon Measurement at NPL has supported businesses large and small with their innovations and in some cases has even designed its own emissions savings technologies. This work is essential in ensuring the effectiveness of energy reduction initiatives, for example the Government’s Green Deal, which lets householders and businesses pay for energy-saving technology over time through their energy bills. For programmes like this to be effective – for the individual and the environment – we need accurate ways to measure energy savings, and assurances that the technology we install does what it says on the tin.”

Whilst all the projects assessed will have some impact on carbon emissions reductions, actual quantifiable impact varied substantially. Measurement had the biggest impact where a lot of energy is involved – often where a major technology transition is yet to occur, such as in domestic heating, power stations, fuel cells and the smart grid. Where a technology transition is already under way, such as in LED lighting, measurement can enhance the significant savings that are already being made.

One of the projects analysed by the report included optimising a new design of electrode for organic photovoltaic cells – cells that turn sunlight into energy. The work underpinned the design of flexible electrodes which are essential if the promise of organic photovoltaics – initially in areas such as wearable electronic devices – is to be realised. The specific project studied is estimated to reduce carbon emissions by 257,000 tonnes over 8-10 years.

The report confirmed that measurement plays an important and economically advantageous role in carbon reduction. It concluded that measurement adds value across many areas and all the current areas of the Centre’s focus play a useful role.

Jane Burston, Head of the Centre for Carbon Measurement, said:

“We are only one year in but already the Centre is showing its value. This analysis confirms we are on the right track and that carbon measurement brings a clear, quantifiable economic and environmental benefit. We can now assuredly forge ahead with a diverse range of projects that use our measurement expertise to provide vital support to climate science, low carbon technologies and carbon reduction initiatives.”

Technologia achieves prominence in EPG policy
Technologia recently completed a study for the UK Department for Culture Media and Sport (DCMS) on the future of Electronic Programme Guides (EPGs). An EPG is the on-screen menu which enables viewers to navigate and select broadcast TV channels. EPGs have value in both economic and cultural policy terms. Economically they can support well placed channels, by facilitating audience access. Culturally they can support easy access to culturally valued content such as PSB content and UK-originated content in news, current affairs, children’s television, documentaries and quality drama.
Current legislation and regulation requires that Public Service Broadcasting channels (PSBs) receive ‘appropriate prominence’ in linear EPGs, but without defining ‘appropriate prominence’. What constitutes ‘appropriate prominence’ is debated, and consequently differently interpreted on different broadcast platforms.
With both changes in technology and policy priorities Technologia was asked to reassess the role of EPGs in the context of the Government’s core TV broadcasting policy objectives. A key issue was how to define and measure the prominence given to the channels near the top of EPGs, and how to regulate the system which gives EPG prominence to PSB channels. The project involved i2media Ltd and an ex-government economist. Our report is published on the DCMS website.
Report

Our analysis of recent UK patenting shows that UK universities account for 25% of UK pharma patents but only 6% of non-pharma. Globally universities own about 12% of all pharma patents so UK institutions patent more than twice the normal amount in this key sector.

The study – Patenting in the UK – which we undertook jointly with another Cambridge consultancy Patanalyse, compiled a database of all patents filed by UK inventors, including those filed worldwide, but excluding double counting of patent families. Using this ‘cleaned up’ database we have produced a profile of UK ‘inventiveness’.

The analysis shows that just 30 companies account for a quarter of all UK-originated patents. The UK’s patenting activity is clustered around three topics and in each cluster a small number of key companies dominate. In chemicals and pharmaceuticals, GSK, AstraZeneca, Unilever and Procter and Gamble are in the lead. In engineering, the aviation and defence contractors such as Rolls-Royce, Airbus, BAE and Qinetiq form a strong concentration, though there is also a materials technology cluster which includes Schlumberger and BP. Dyson is also in the engineering cluster, with a remarkably high patent output for its size. Electronics and software include star players such as NXP Semiconductors, IBM and telecoms operators and suppliers.

Patenting by universities in dominated as might be expected by Oxford, Imperial College and Cambridge. The top 25 UK universities in term of patenting are shown in the figure below. 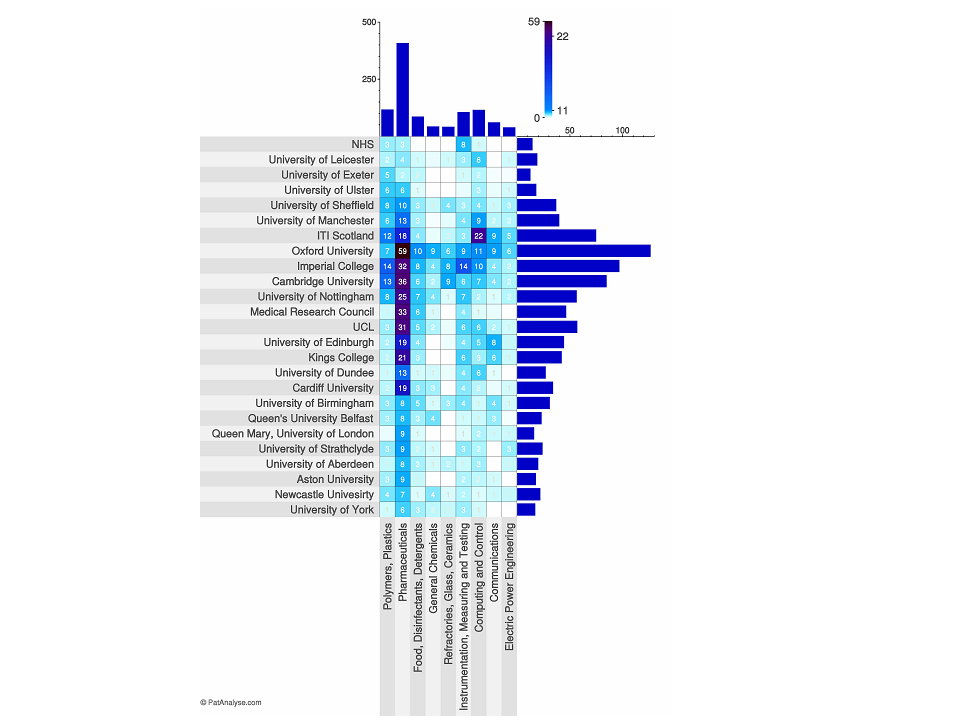 Comparing the patent analysis to the soon to be abandoned R&D Scoreboard, the report highlights that patents allow the topics of research to be discovered whereas R&D spend alone does not. “We hope that these results can be fed back into UK industrial policy says Russian-born Victor Zhitomirsky whose company Patanalyse developed the database.

We found that the R&D spend per patent was approximately identical across most industries at £2m. Considering the evidence that different industries produce and use patents quite differently we were surprised at this universality.

Because R&D spend already attracts exceptional tax relief, and the income derived from patents will soon also get special treatment from HMRC, questions arise as to the appropriate balance of the relative tax subsidies based on these two indicators. We suggest that the pharmaceutical industry, software development and electronics hardware will benefit most from patent-based tax relief.

The Leverage Effect of Photonics Technologies: the European perspective
Technologia was part of a research consortium lead by TNO (Netherlands) with partners Technologia (UK) and the Electronics Sensors, Photonics Knowledge Transfer Network (UK). The study was commissioned by the European Commission DG Information Society and Media and carried out in close cooperation with the European Technology Platform Photonics21.